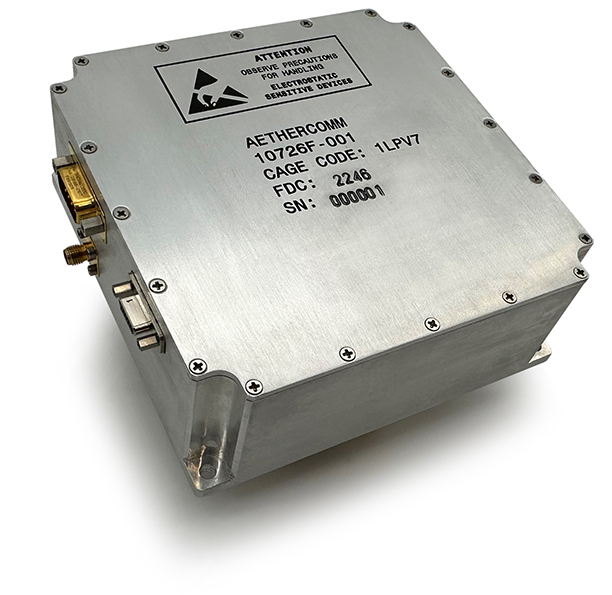 Aethercomm Model Number SSPA 8.025-8.500-4 is a medium power, GaN, solid state power amplifier deployed in LEO orbit. This amplifier operates from 8025 MHz to 8500 MHz and delivers ~4 watts of linear power to the load minimum. This SSPA has ~48-50 dB small signal gain. This X Band SSPA must pass multiple, non-coherent, tones with minimum distortion and high efficiency. The amplifier is used in a LEO satellite and must be able to operate for a period of at least 1 year. This broadband SSPA is packaged into a rugged housing that it used in high shock/vibration/acceleration environments. This X Band amplifier is operated at 6dB Output Back Off (OBO) to transmit high Peak to Average Ratio (PAR) waveforms. This SSPA delivers ~4 watts of RF output power for ~20 Watts of DC input power. Typical high PAR waveforms include White Gaussian Noise with a PAR of 10.5dB. The gain varies <1.5dB over temperature and lifetime. The group delay across the band is <2.0 nS. The Noise Power Ratio (NPR) is >14.5 dB at 6dB OBO. Input and output VSWR are 1.5:1 maximum. There is a 96% efficient EPC internal to the SSPA to filter, regulate and pass voltages needed within the SSPA. The EPC has been tested for EMI against MIL-STD-461 and passed all CE, RE and RS requirements. The input voltage is 28Vdc nominal from the BUS. There is a PA Enable Command that is used to gate the PA on and off. Employing this signal, the SSPA can be gated On and Off in 10uSecs maximum. The logic levels are mission dependent so please contact the factory for specifics. Nominal input drive for rated power is -20 dBm. There is command/control and telemetry specific to this SSPA. Please contact the factory with any questions. The input connector is SMA female and the output connector is TNC female. The digital interface is RS422 LVDS. RF output power telemetry is an analog signal along with input current. SSPA On/Off is a discrete TTL/CMOS signal. Temperature telemetry is an analog voltage proportional to baseplate temperature.

This SSPA is employed in demanding high shock and vibration environments. This module has been launched in space and it fully survives all flight dynamic requirements. The housing volume is ~5.1” (L) by 5.1” (W) by 2.0” (H). The mass of the unit is 2.0 pounds maximum. DC and logic connections are accessible via a 15 pin Micro-D connector. A summary of test data appears on pages two and three of this data sheet at room temperature. This SSPA operates from -24C to +61C baseplate temperature for acceptance. The configuration shown is a vented SSPA.

This is an example of an Aethercomm standard product. Aethercomm designs and manufactures high performance, high power CW or pulsed SSPA’s for commercial, military and satellite communication.